In less than one year, social websites have taken almost 15% of total internet traffic, whereas up until 2007, most traffic was generated through search engines like Yahoo!, Live Search and of course Google. Such an explosive growth in a medium that has experienced a massive growth itself, no need to say the social web is becoming increasingly important in a healthy (online) marketing mix.

Whether Metcalfe’s Law is also applicable to the social internet as a manner of communication is a point of discussion, but trends seem to indicate it is.

Metcalfe’s law states that the usefulness, or utility, of a network equals the square of the number of users. In other words, the value of networked systems grows exponentially as the user population increases in a linear manner. 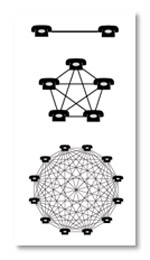 The social web is changing the way we communicate. Let’s take a look at some of the theses of The Cluetrain Manifesto, a call-to-action for all businesses operating in the newly-connected marketplace that is the internet:

In other words, to be successful on the social web, companies need to rethink their ways of communicating. Although the internet looks like a mass medium, it is not. Think one to one communication and you will have a better idea what the social web is all about. Or as Aegis Media owner Frederick Marckini stated:

“The deer now have guns: consumers fight back.“

Next: WHY SHOULD YOUR COMPANY ENGAGE IN SOCIAL MEDIA MARKETING? >>